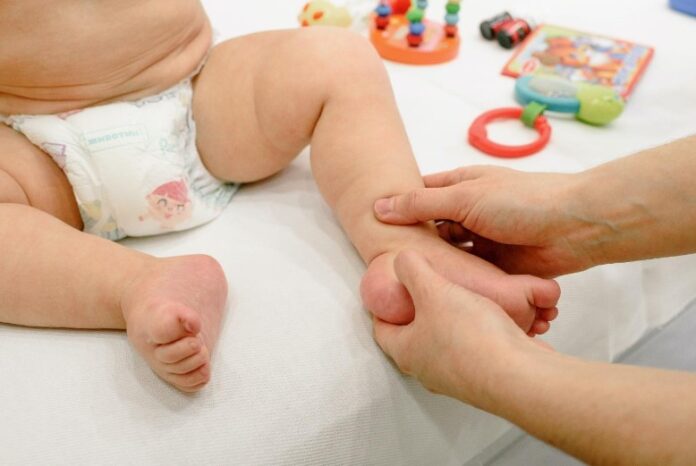 Massage for infants is not a new practice. In fact, massages have a long history that dates to prehistoric India. Back then, massages weren’t only given for relaxation; they were also done to improve circulation, rid the body of toxins, aid digestion, and enhance overall health.

Let’s explore some of the most significant benefits of baby massage in detail:

2. Reduces the risk of jaundice

According to recent research, infant massage can also reduce bilirubin levels in the blood, which causes jaundice, and increase bowel movements, which helps eliminate excess bilirubin from the body.

3. Beneficial for children with cerebral palsy

The cerebral palsy types include spasticity, ataxia, athetoid, hypotonia, and mixed cerebral palsy. While each type can vary in severity, symptoms, and treatment, their mobility limitations make them all suitable for massage.

According to research by The Touch Research Institute, 20 young children with cerebral palsy were given a 30-minute massage for three months. They had improved cognition, a reduction in spasticity, reduced rigidity overall and in the arms, and better fine and gross motor function.

The effects of massages on adults and babies have been studied extensively, and there is no doubt that it is capable of reducing stress and lowering blood pressure. In this study, massage therapy was found to be life-saving for premature babies.

What is the mechanism by which massage lowers stress hormones? When you touch someone, endorphins are released, resulting in a drop in cortisol. Consequently, babies feel more secure and safe, and this leads to a more balanced state of well-being.

Did you ever wonder why so many baby swings, rockers, and seats vibrate? There is a reason for this. Vibration is actually helpful for relieving colic. However, research shows that spending a long time in a chair or baby container is not good for the development of a baby. According to this study, massage can calm a colicky infant as effectively as vibrating chairs.

A study from the University of Warwick revealed that baby massage lowers cortisol levels, the stress hormone, and stimulates the production of melatonin. The main function of melatonin is to regulate sleep cycles, so baby massage helps the baby fall asleep faster and stay asleep for a longer period of time.

7. Strengthens bonds between parents and child

In studies, eye contact and skin-to-skin contact reinforce the bond between a baby and his or her mother. Researchers have found infant massage particularly helpful for mothers suffering from postpartum depression and struggling to bond with their babies.

Mothers aren’t the only ones who benefit from these benefits. Journal of Perinatal Education published a study indicating that baby massage reduces paternal stress and improves father-child bonding.

8. It relieves constipation and gas

Babies are unable to burp themselves because they lack a developed sphincter in their esophagus. As a result, gas builds up in their system, causing discomfort in their stomachs. This pressure can be relieved by infant massage.

To encourage good digestion and a healthy GI system, gently rub your fingers under your baby’s ribs in a clockwise direction.

Massage enhances alertness, and a more alert baby is more likely to learn. One study found that 4-month-olds who were massaged for 8 minutes performed better to habituation tasks involving audio and visual stimuli than those who were not massaged.

In another study, this benefit of massage was also demonstrated for preschoolers. After receiving a massage, preschoolers perform better on tests.

It is widely known that babies have the softest skin in the world, but that delicate skin is also very sensitive. With so many nerve receptors, babies are susceptible to being overstimulated. With that said, infant massage offers many benefits than risks. Babies and children who receive massage tends to be calmer, sharper, and have fewer disorder symptoms.