The Global Magnitude of the Problem of Cancer 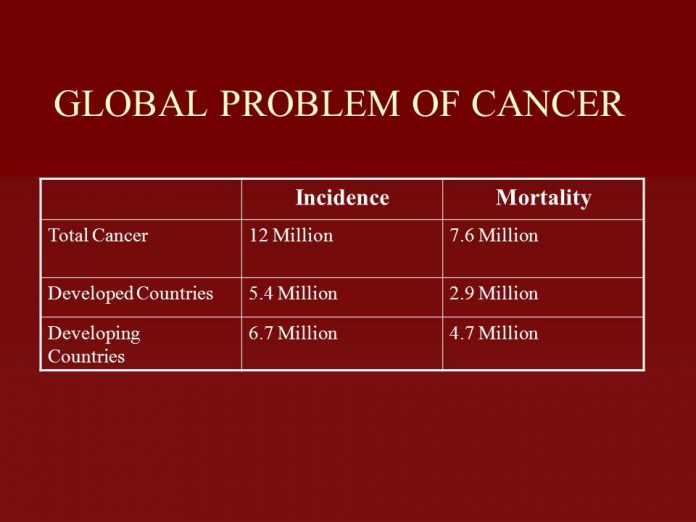 Cancer afflict all the communities throughout the world. At present more than 11 million people are diagnosed with cancer and more than 7 million people die due to cancer every year, throughout the world. More than 30 million people are living with cancer at present. In term of incidence, the most common cancers are Lung cancer (12.3% of all cancer), breast cancer (10.4%) and colorectal cancer (9.4%). In terms of death from cancer the most common cancers is Lung cancer (17.8% of all deaths due to cancer).

The most important feature of the distribution of cancers between sexes is the predominance of lung cancer among males. Stomach, esophagus and bladder cancers are also common among males. Usually the difference in distribution between the sexes is attributed to the difference in exposure to the causative agents rather than difference in susceptibility. For example cancers of pancreas, colorectal cancer has insignificant sex difference. So, the incidence and mortality due to cancer is not effected by sex.

Burden of cancer in different countries is different from other countries due to difference in distribution . The total cancer burden is highest in the developed countries, due to high incidence of cancer associated with smoking and western lifestyle, i.e. cancer of lung , prostate and breast. On the other hand 25% of the cancers in the developing countries are due to infectious agents e.g. Liver cancer (hepatitis B), Stomach cancer (Helicobacter pylori), and cervical cancer (Human papilloma virus). In western countries like USA recently there is a decline of incidence and mortality due to cancer. This is due to reduction in smoking prevalence, improvement in early defection techniques and advances in cancer therapy.

In USA there is no nationwide cancer registry. So the incidence of cancer is estimated on the basis of the National Cancer Institute’s Surveillance, Epidemiology and End Results (SEER) database and also from population data from the U.S. Census Bureau. 19.3 million new cases of cancer were diagnosed and over 10 million peoples died from cancer in 2020. Cancer incidence has been declining in USA by about 2% each year since 1992.