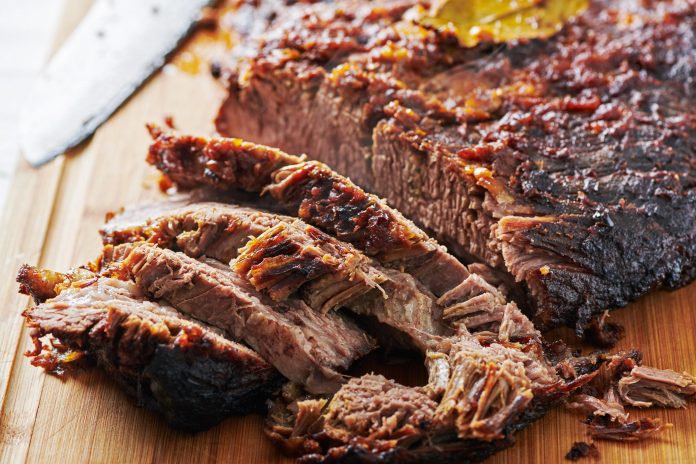 One of my favorite types of meat is brisket. I love going to BBQ joints and ordering sliced brisket with a tangy sauce, then eating some later for leftovers as brisket sandwiches on breads and buns, or to chop it up and making chopped brisket with sauce. There are so many ways to serve brisket once it’s been prepared.

Brisket, per pound, isn’t an expensive cut of meat compared to steak and sirloin cut meats, but because it’s so big, many people shy away from buying it. Also, because brisket is typically a smoked and grilled meat, most people don’t even know how to cook a brisket in the oven. With proper packaging, a large an oven-cooked brisket can provide enough meat for a family for several weeks or a month, and save money on grocery bills for meat.

So how do you cook a brisket in an oven? It’s super simple!

What you need to cook a brisket in an oven:

Onions and garlic cloves – I like to slice onions and fresh garlic cloves into the water/oil that surrounds the brisket, for added flavor and a wonderful cooking aroma.

Briskets can be cooked with brown gravy, meat gravy, BBQ sauce or other types of sauces, but if you’re wanting to use the brisket for several different meals, it’s best to simply let it cook in its own juices, with a little oil and spices. This way, later, you can have BBQ sauce with brisket, make brown gravy to pour over the slices, or chop it up and mix it with sauce for chopped brisket sandwiches.

There are two sides to a brisket. One side will have the fat cap on it, which is a layer of fat that is about ¼ to a little less than 1 inch thick. Even if you’re wanting a lean brisket, don’t remove this fat cap. It helps keep the brisket from drying out and helps deliver more flavor through the meat. This fat cap can be removed after the brisket has cooked if you want leaner meat.

Preparing the Brisket for Cooking:

Rub the brisket with a mixture of dried garlic, salt and pepper and then wrap the entire brisket in foil. Seal it tightly, and then place the brisket in the pan, with the fat cap side facing up. Pour approximately ½ to 1 cup of water into the bottom of the pan, around the brisket foil packet, depending on how large the pan is and how big the brisket is.

The very bottom of the pan should be covered in water, but the brisket shouldn’t be floating or soaking in it. This is just to keep the environment in the oven and pan moist, so the brisket doesn’t dry out while cooking.

Cooking the Brisket in the Oven:

If the pan has a lid for it, put the lid on and place the pan in the conventional oven in the very center of the oven interior. Bake at 300 degrees for one hour.

Remove brisket from the oven, being very careful because the pan and the brisket and foil will be very hot. Let the foil cool enough to open the foil packet around the brisket. Do not remove the foil completely yet, but simply open it up like a bowl.

In a mixing bowl, combine Budweiser beer (do not use a light beer; Budweiser has the best ingredients for a brisket, but any full beer will work in a pinch); one can of Dr. Pepper (do not use diet); and one cup of Worcestershire sauce; 2-4 ounces of liquid smoke (depending on size of brisket), and a half cup of olive of canola oil.

Mix well and then pour into the foil bowl around the brisket. Cover the brisket again with the foil, but this time, you don’t have to form a tight seal.

Now the brisket is ready to be cut and served or packaged and saved for later, or both. If you’d like to add barbecue sauce to the brisket, you can slice it, slather it with sauce using a brush, and then pop it back into the oven on 425 until the sauce begins to bubble. You can slice it and cook it in brown gravy and serve over rice. You can chop it up and cook the pieces in a pan with barbecue sauce and serve chopped sandwiches. The options are endless.

There you have it: an easy indoor way to get a smoky flavored grill-tasting brisket from your conventional oven. Enjoy!

How to Prevent Headaches